Bass player, Jeff Lyons AKA DeLuca,
with the affinity for all that is low and funky, started out in the 1970’s listening to all the Funk, Rock, Disco and Top-40s of the day. While casually listening to albums and the radio like most people it was an influential funk album “Mothership Connection” by Parliament that made him tune in his ear and take notice of the bass guitar. The funky bass lines created by William “Bootsy” Collins that forever changed how he listened to music and started his musical path which has continued for 30+ years. 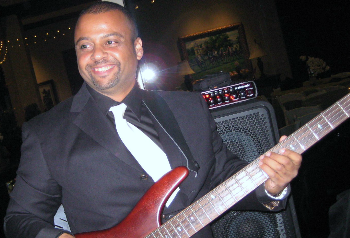 Once tuned into the bass he started listening to all the great “groove” players such as James Jamerson, Larry Graham, Louis Johnson, Mark Adams, Geddy Lee, Anthony Jackson, Rocco Prestia,  Paul McCartney, John Paul Jones, JacoPastorius, and many more.   DeLuca spent most of the 1980’s and 1990’s playing in various local original and cover bands in the San Francisco Bay Area. While in these bands DeLuca honed his playing skills in genres such as blues, rock, jazz, funk, top-40, country, and hip-hop. Also, while playing with all these artists and groups he learned other essential skills such as being a good band mate, being professional, band management, live sound, marketing, recording, working with club owners, booking agents, and private clients looking to hire a band for a wedding or party.

All that on the job training came in handy when in 1997 DeLuca joined the Dance Party Band Bay Boogie as the “bass player”. This was his introduction into working corporate gigs, weddings, casinos and festivals. After several years and a few personnel changes the band decided to change its name to Busta-Groove! DeLuca eventually took over as the manager of the group and with the help and expertise of a few key band members the band has been one of the top dance party bands in the San Francisco Bay Area for almost 10 years.

One area that DeLuca has always been interested in was teaching bass guitar but time constraints and the fact he didn’t want to be the typical music teacher who shows you how to play scales, read music, etc. has delayed him until now. He can show you how to play bass in your chosen genre or be a versatile player in several styles. He also wants to show you how to be a professional at auditions, rehearsals, and gigs; what to look for when buying a bass, amplifiers, effect pedals, strings, and other gear. He can also help you get your promotional material i.e., EPK (Electronic Press Kit) ready and how to approach club owners, booking agents, festivals and private clients.

Get in touch with us